On top, PAYBACK achieves the study's best score out of more than 550 apps examined 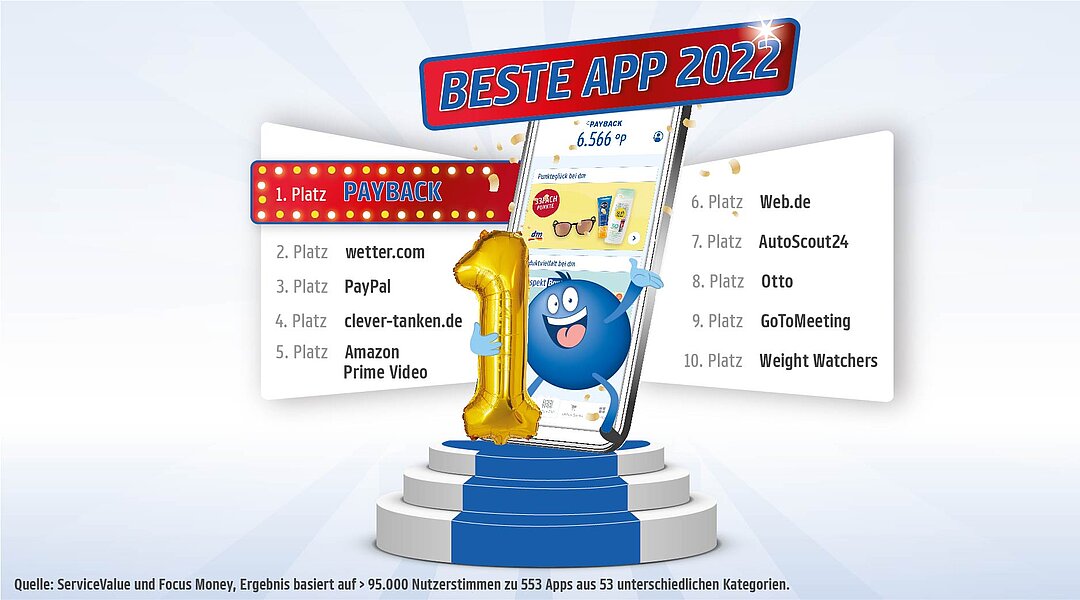 The PAYBACK app is the "most customer-friendly app of 2022". In a recent study, it was not only named "Best App" in the "Bonus Programs" category, but also achieved the highest individual score of the more than 550 apps examined, ahead of PayPal, Wetter.com, Signal, Uber and the Netto app, among others. The PAYBACK app enables a total of 31 million PAYBACK customers to store on the move at 680 partner companies, collect points, redeem them and save money, and with PAYBACK PAY it also offers one of the most popular mobile payment functions in Germany.

"User-friendly and beneficial - that's how our app is described by users, and we are naturally delighted with this great rating. For years, our mission has been to bundle as many services as possible. In recent months, we have added a particularly large number of innovations such as PAYBACK GO and Fuel&Go. For even greater flexibility in mobile payments, a credit card can now also be deposited with PAYBACK PAY, and all this is appreciated," says Michael Eichhorn, Director Digital POS and PAY at PAYBACK.

PAYBACK GO enables customers to check in with partner companies on the move and thus quickly find out about offers and coupons, while Fuel&Go enables mobile payments to be made directly at Aral petrol pumps. The PAYBACK app is currently used by more than 10 million active users in Germany. PAYBACK has already received numerous awards for its app, most recently from the Süddeutsche Zeitung and the SZ Institut for "apps with very high added value", and it also came first in the "German Bonus Awards". In the BILD Nutzer:innen study, the PAYBACK app won the "Top Everyday Apps" award in 2021.

For the representative online survey "Most Customer-Friendly Apps 2022", the Cologne-based rating and ranking agency ServiceValue, in cooperation with Focus-Money, asked over 95,000 users about 553 apps from 53 different categories. From a selection of apps that was manageable for them, the participants selected the apps that they had used themselves during the last 12 months and rated them with regard to the question: "Overall, how satisfied are you with the use of the following apps as a smartphone service?

The study took place independently of the rated providers.
A graphic can be found here.